The Potential of Open Data to Curb Corruption

The following article was written before the 2018 Mexico General Election, and demonstrates that open data could potentially be the key factor, in fighting corruption.

On July 1, 2018, voters in Mexico will elect a new president who will serve a six-year term. Throughout the electoral season, the hot-button issues have revolved around corruption, how to curb it, and which political party has the fewest skeletons in the closet. As election day nears, the populist front-runner Andrés Manuel López Obrador looks poised to win the race.
No matter who wins, there is a big problem facing Mexico's electoral democracy: Money. 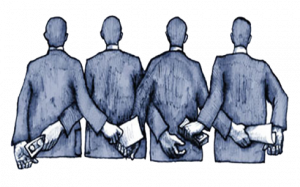 The centrality of corruption in the political debates explains, in part, why Andrés Manuel López Obrador, or AMLO as he is known, leads the pack. For years, AMLO has cultivated an image of a man indifferent to material possessions, insusceptible to corruption. Despite this, neither he nor the other candidates have discussed Mexico’s current anti-corruption agenda in depth - an agenda in which open data plays an important role.

The most surprisingly silent candidate is José Antonio Meade of the incumbent Institutional Revolutionary Party, who would benefit from showing off his party’s progressive transparency initiatives. In recent years, Mexico has become one of the most advanced countries in the Organization for Economic Co-operation and Development (OECD) in terms of a national open data policy, currently ranking 5th out of the 35 member countries in the OECD.

This achievement is no accident. It is the consequence of a deliberate mandate from the federal government to increase transparency and accountability in Mexico by making public data more accessible. But as these initiatives take off, is the optimism surrounding open data as a means to curb corruption warranted? Put simply, is the strategy paying off?

To find out, we first must agree on how we can measure success. In cross-national studies, the Corruption Perception Index (CPI) released every year by Transparency International is the benchmark to understand which countries are making progress against corruption. 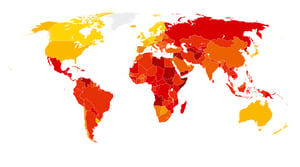 Transparency International's CPI map
The CPI measures 180 countries by “their perceived levels of public sector corruption.” By measuring perceptions of corruption, however, the CPI is not measuring incidents but opinion, and is therefore a problematic yardstick. For example, the 2018 survey on Latin America reported that perceptions have remained unchanged in the region despite acknowledging that as a whole the region has made “ great strides in the fight against corruption.”

Clearly, a new metric is needed in order to move past perceptions and into fact. This is where open data is critical. Using data sets released by governments, a number of proxy indicators for measuring corruption have been proposed over the last few years. One of these indicators is the Corruption Risk Index (CRI). Developed by Fazekas and Kocsis, it is comprised of publicly available official electronic records of over 2.8 million government contracts in 27 EU members states (plus Norway) between 2009 and 2014. The CRI measures corruption risk in public procurement through a composite index of “red flags” (eg. single bidding in competitive markets, recurrent use of “direct” or “emergency” awards) that signal potential corrupt practices. While none of these are necessarily corrupt practices in and of themselves, they provide data points that signal a higher likelihood of a corrupt environment.

A version of the CRI was employed by the Instituto Mexicano para la Competitividad (IMCO) in a study released earlier this year on Mexico’s public tendering system. Using a database of 700,000 records from the federal government between 2012 and 2017 (amounting to 10% of the total spending in those years) IMCO made two important findings:

Again, these findings are not evidence of corruption, but they do expose Mexico’s tendering system as one that lacks competition. One can reasonably conclude from this that the government is not fully capitalizing on technology to reduce costs in procurement, and that the risk of corruption is high in the current system.

"The impact of corruption...definitely impacts the cost of investment"

IMCO’s findings also suggest that open data is not in and of itself the solution to corruption. The truth of the matter is that in most cases corruption is incredibly difficult to nail down, and measuring it directly is far from an exact science. In addition to this, public officials are continuously adapting to their environment, which, in the current political climate, means including the use of data analysis to measure their performance. Frequently, corruption evolves at the same rate as the preventative measures put in place against it. In reality the nature of corruption is such that most people trying to measure it effectively end up like Lewis Carroll’s Red Queen: constantly running just to stay in the same spot. 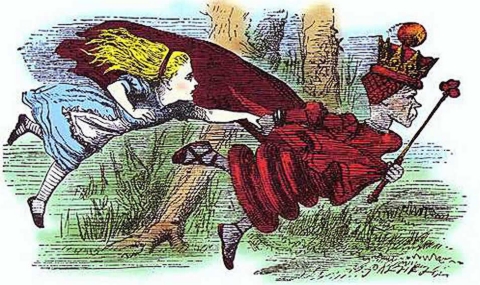 “Here, you see, it takes all the running you can do, to keep in the same place. If you want to get somewhere else, you must run at least twice as fast as that!" Lewis Carroll, Through the Looking-Glass
The baseline of public information being made available through open data portals, however, is a critical step in the right direction. Sunlight is the best disinfectant, and analysis of public records en masse can go a long way to undermining corrupt practices across all levels of government. In order to keep up with, track, and predict corruption, analysis will have to be agile, flexible, adaptive, and experimental - but turning the relevant data into a valuable input is the first step to fighting corruption and ensuring trust.