A career in tech has never been more attractive. Companies of every size are champing at the bit to bring talented programmers into their organization, and careers in STEM fields (science, technology, engineering, and math) have become synonymous with high-paying, interesting jobs. Put simply, the tech environment is thriving. This is especially true when it comes to computer science, which, according to the New York Times, will account for 60% of all jobs in STEM fields in the next six years.
If things don't change, less than a quarter of these jobs will be held by women.
Although they make up the majority of college grads "less than 25 percent of the computing workforce is women" says Reshma Saujani, founder and chief executive of Girls Who Code. This is a shockingly low proportion, and is one of the wider canyons in tech's diversity gap.

The diversity problem isn't caused by any one thing. From bogus hiring practices to discriminatory work environments there's an uphill battle being fought on many fronts. The statistics can be grim, as noted in a recent New York Times article which called attention to the fact that in the Fortune 500 there are more chief executives named John than chief executives who are women. In the past 30 years the percentage of women working in STEM fields has gone up by only two percent - and this is during an explosion of demand in the tech industry. Now that most companies rely on computing regardless of their industry, the lack of women in computer science jobs is a problem that if left unchecked would permeate every level of the corporate landscape for years.

A new survey of high school students has shown that the root of the problem might run deep.

"more than 70 per cent of both Canadian teenaged girls and boys believe it will be "extremely or very important" for their careers to know how to program...

...boys were nearly twice as likely to agree they are "extremely" or "very" interested in pursuing careers involving coding or programming (50 per cent) than girls (27 per cent)."

The fact of the matter is that even before they've finished high school, the deck is unfairly stacked against girls pursuing a rewarding career in tech.

This is where Hackergal comes in. Hackergal is a not-for-profit organization that introduces girls to code through a hackathon, aiming to inspire a generation of young women to bring equality to the tech industry. These hackathons - events in which programmers work together, generally over a limited time, to develop an application or solve a problem - take place in schools across Canada, and they've become truly massive. The most recent winter event, held in December 2017, set a record for the largest hackathon in Canada and saw 2,900 middle school girls participate.

The program works by teaching code in classrooms around the country in preparation for the actual day of the hackathon, on which the girls will work on an assignment that uses the skills they've learned in the classroom. By structuring the hackathon this way, Hackergal creates an environment in which the girls can learn to code alongside classmates and build confidence in a skill that can last a lifetime.

"Hackergal is so much more than a hackathon. It is a tool to inspire young girls." 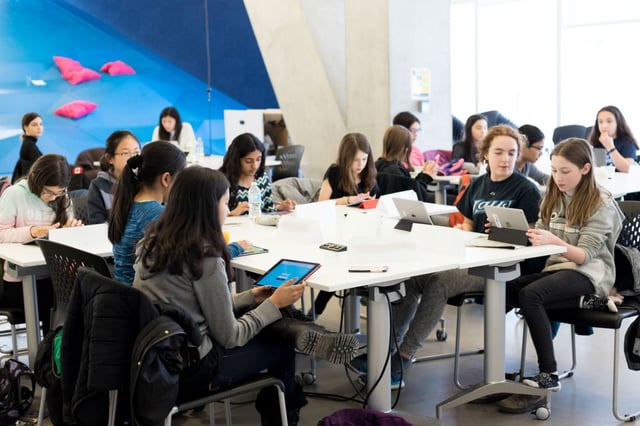 Hackergal participants in the March Break Coding Camp 2018
Hackergal's spring Hackathon is taking place today across Canada, and it's a thrill to watch as over 2,500 girls in over 100 different schools are being exposed to code, working together to learn programming in a no-risk, fun, environment.

It's estimated that in the next ten years over one million tech roles will need to be filled in North America. With Hackergal's help, we can ensure that girls are empowered to fill these roles, help build a disruptive tech industry, and change the ratio when it comes to women in tech.

"With encouragement like this, more girls and young women will gain confidence in science, technology, engineering and math, and pursue educational and career choices in these fascinating and growing fields."

Hon. Scott Brison
President of the Treasury Board of Canada

We're proud to work with Hackergal to provide them with public data to help supercharge their hackathon recruiting efforts. For more information about Hackergal, visit their website or reach out.
ThinkData offers a lot more data than that – over 250,000 thousand datasets from more than 75 countries around the world. Request a consultation with one of our data experts to talk about external data.