In this blog post, we host a story from the Institute for Design-Driven Analytics by Parmisse Menendez Limo, recent graduate of Humber College’s graduate certificate program in journalism, where she digs into the data that suggest why Peru's poorest workers are less likely to contract COVID-19.

Since the start of the pandemic, COVID-19 has led Peru into a severe economic crisis in which more than 6 million Peruvians have lost their jobs between April and July 2020.

At particular risk are the country’s informal workers, who make up over 70 per cent of the Peruvian workforce. These workers are people who do not pay taxes or get payslips. Many sell their wares in the streets as peddlers, or from their doorsteps.

Yet an analysis of Peru’s COVID-19 data suggests that the country’s poorest provinces – that also happen to have the highest rates of informal workers per capita – have some of the lowest levels of positive COVID-19 infections and related deaths per capita.

How is it that a country’s most vulnerable economic class seems less susceptible to COVID-19? A closer look suggests that geography, lifestyle, and social pressure play important roles.

Provinces located in the Andes (cities 2,000 meters above sea level) have the highest rates of poverty as well as informal workers, yet comparatively low COVID-19 rates to wealthier provinces. Many of them perform rural activities like harvesting, mining, silviculture, and hunting.

By comparison, Ica, a coastal city with Peru’s lowest poverty rate, has recorded 168 deaths per 100,000 habitants – nearly six times that of Cajamarca.

According to epidemiologist Milagros Anuel, healthier lifestyle choices have led Andes’ people to react better to the spread of COVID-19 than coastal or jungle populations.

“It has been demonstrated that people from the Andes consume healthier food, a bird raised by them or vegetables harvested by them,” Anuel said. “Poverty influences your culture but not your nutritional state, you could be poor but be nourished.”

Anuel said that crowded markets are an instrument of COVID-19 spread, particularly in Lima, Peru’s capital, due to its coastal humidity. As a result, the virus stays in the air longer, leading to more infections.

She said the only way to avoid the spread of the virus is using the mask properly, washing hands frequently and not touching everything. This can be a challenge for street vendors who spend hours without access to a bathroom.

“Peddlers are a problem, they are a big problem in Lima, a high percentage of infected people are the ones that work in the streets,” she said. “They are a factor of risk because they are everywhere.”

Anuel added that in provinces like Lima and Arequipa the most affected population are women because they are the ones who go to buy food, to the bank and to visit relatives.

Lima has the third-highest rate of positive cases per capita, with an infection rate of 3019 per 100,000 and 131 deaths per 100,000 people; three and fives times the numbers of Cajamarca, respectively.

Elena Martinez, political scientist from Defensoría del Pueblo, says only blaming informal workers for the spread of COVID-19 is unfair due to their increased vulnerability.

“The pandemic and the measures taken by the State have affected everybody but not equally. That is why there are more vulnerable groups than others which have been affected not only by the disease but economics,” Martinez said.

She said that though Peru was one of the first countries to apply a strict quarantine and fines, dealing with COVID-19 is a shared responsibility.

“The political authorities, the President through a strategy that avoids the spread of COVID, but also citizens that should have answered in a proper way,” Martinez said.

Are ‘Ronderos’ slowing the spread of COVID-19?

Martinez said that Peru’s “Rondas Campesinas” – or “ronderos” – as another factor stifling the spread of COVID-19 in the country’s poorest provinces.

The ronderos act like auxiliary police, capturing thieves, criminals, or people they consider having committed a mistake and punish them without the intervention of authorities.

In Peru there are around 250,000 ronderos, with 100,000 in Cajamarca alone. They are mainly present in provinces from the Andes, provinces who have the lowest rates of infected people.

“Rondas campesinas have a long history of applying local justice apart from the State. They first appeared in Cajamarca in the ‘70s to control crime and robberies among the communities and they have been recognized by the Constitution of ’93,” Martinez said.

Martinez says ronderos play an important part in limiting the spread of COVID-19 because they make people respect laws imposed by the State, though she said there have been cases of excessive force and problems with the police.

Facing mass unemployment, Peru’s citizens are resorting to selling things online or taking on multiple jobs to pay their bills.

Veronica Ciertogallo said she was working at Faber-Castell — a German company that sells office and arts supplies — in Lima, and after pandemic started, she was sent into “perfect suspension”. This was a measure taken by the Peruvian government to avoid layoffs and protect businesses. Under perfect suspension companies are permitted to pay employees a reduced rate of 760 soles ($304 CAD) per month.

“I take all the measures to sell by catalogue. I send the products through couriers and when I go out, I wear my mask, use alcohol and stay away from people,” Ciertogallo said.

She does not consider herself as an informal worker, even though she does not pay taxes and does not get pay slips since she was later laid off from Faber-Castell. Ciertogallo now adds to the large informal worker population located in Lima.

Peddlers can be found in different areas of Peru. They are usually found near traffic lights selling everything from chocolates to counterfeit books. However, after first 60 days of quarantine, along with subsidies totalling 760 soles ($304 CAD) peddlers returned to the streets.

For many informal workers, a day without work is a day without food. Peruvians are still in quarantine, nevertheless, some restrictions have been lifted.

Operating unlicensed businesses from doorsteps is also a new part of some Peruvians’ lives. America Rojas now works from home with reduced hours, but because money is tight, she still needs to sell desserts informally to increase her income.

“The job I do is informal because I don’t have license to sell. I used to sell desserts [as a hobby], but now because of COVID-19 I sell in my street door and sometimes through WhatsApp because people already know me,” Rojas said.

“When I receive the money, I disinfect the coins with alcohol, I wear my facial protector as well as my mask and gloves.”

For informal workers, COVID-19 an unfortunate but unavoidable risk

Informal workers need to work to provide for their families. Even though many of them take the measures to avoid the spread of COVID-19, selling in large markets like Lima’s Gamarra, places them at a heightened risk of spreading the virus.

Photos from the surroundings of Gamarra, a street market in Lima, Peru captured by Mauricio Villanueva: 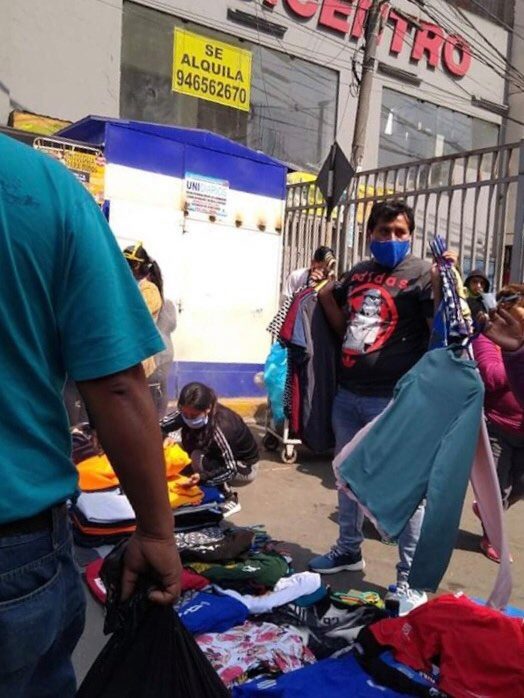 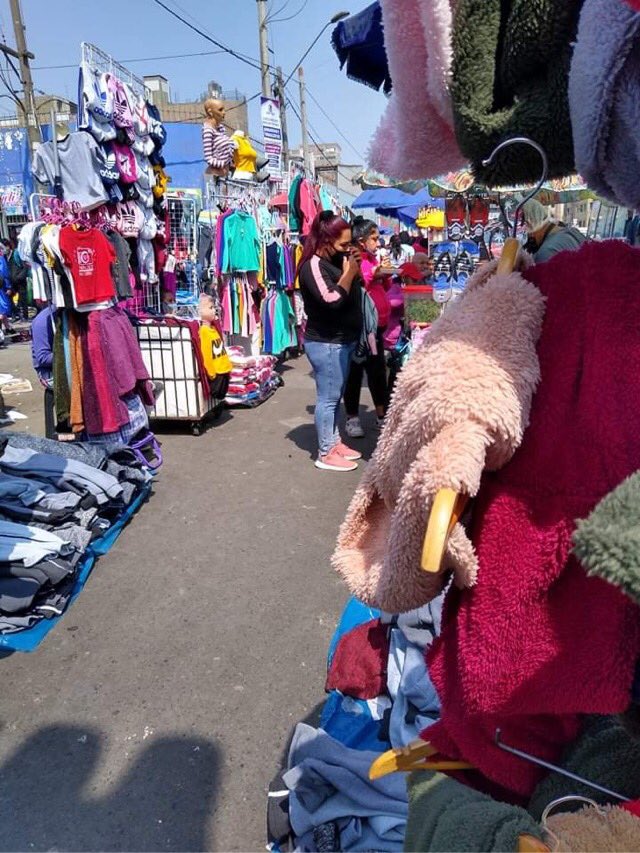 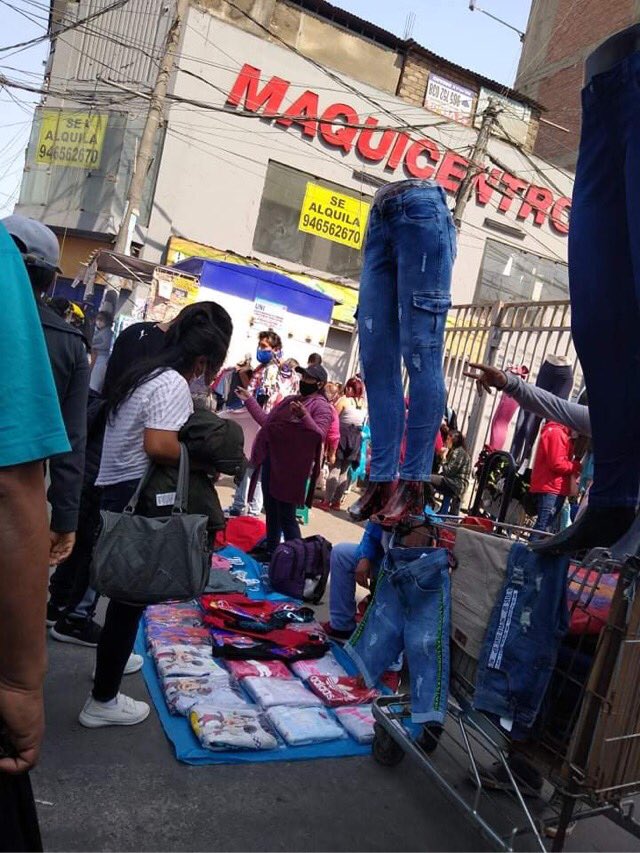 Geraldine Sabastizaga, a young student who sold prepared food in the street prior to the pandemic has resumed selling in public, even though she believes peddlers contribute to the spread of COVID-19 if they do not protect themselves as it is required.

“I wear a mask, gloves and use alcohol to protect myself and my clients from the virus,” Sabastizaga said. “I am afraid of the police because they can come at any time and take away our things.”

She also said that a mandatory 10:00 p.m. curfew is reducing her opportunity to work.

“We now have to find other ways of getting the money we are not earning. I now take care of my niece to get more money because it is not enough with what I make selling in the streets,” Sabastizaga said.

About the Author
Parmisse Menendez Limo is a recent graduate from Humber College. She previously studied Communications and Journalism in her home country, Peru. In Canada she was able to write for Humber News and was editor of Humber's newspaper, Etcetera. She also produced newscasts and reports for Humber radio and TV.

This article was made possible through a partnership between Humber and ThinkData Works. ThinkData is supporting data-driven journalism and improving access to external data for students in the Journalism graduate certificate stream at Humber.